Cinnamon roll
Ice cream
Gina Lash is the chubby and intelligent best friend of Angela Anaconda. She is the smartest, proudest, and heaviest student in the class. Gina Lash always helps Angela Anaconda out of problems or offers solutions to her troubles. Both Angela Anaconda and Gina Lash have a lot in common, such as their cloudy pajamas and hatred of Nanette Manoir, which is mentioned in the episode "Angela Who?". Gordy Rhinehart has strong feelings for her.

Gina's dad is never referenced in the show.

Gina Lash is a big food lover. She likes cinnamon swirls, pizza and Jiggly Fruit. She often hangs out at Abatti's Pizza with Johnny and Angela. Gina's appetite is so huge that she is able to eat more than eighty servings of a large meal and often even helps Nanette.

In the Halloween special The Haunting of Angela Anaconda, she dressed up as a mad scientist. 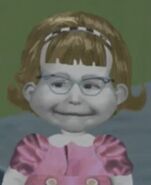 GinaLash
Add a photo to this gallery
Retrieved from "https://angelaanaconda.fandom.com/wiki/Gina_Lash?oldid=6801"
Community content is available under CC-BY-SA unless otherwise noted.