The tertiary antagonists of the series, Mark and Derek Anaconda are Angela Anaconda's rude, dimwitted teenage brothers who get most of their humor from roasting their younger sister whenever she does something they consider worthy of ridicule. They are both on the Tapwater Springs football team, coached by Gordy Rhinehart's father.

The brothers barely interact with anyone outside of the Anaconda family, but in the episode "Derek's Better Half" (S03E03), Mark briefly dates Angela's babysitter Raven Schwartz.

Mark and Derek are both very stereotypical 'jock' teen boys who are big, strong and mean, but really not that smart and sometimes easy to manipulate.

Derek is generally portrayed as being slightly more naive and cowardly than Derek, highlighted by his higher-pitched voice.

Mark has blonde hair, a white football shirt, with dark red lining and with the number 14, blue pants and red sneakers, while Derek has an orange shirt, black pants and dark blue sneakers. Depending on the scene, Derek's sneakers each have a white star-shaped patch on either side, with Angela being shown to own an identical but smaller pair in 100 Yard Lash and Camp Anaconda, and another pair usually being present in the Anaconda family's foyer, next to their front door. Both their sneakers appear to be lightly edited photographs of Converse Chuck-Taylor All Stars, despite them being basketball shoes when Mark, Derek, Richie, the other teenage boys who attend practice and Angela have been shown wearing them for football. 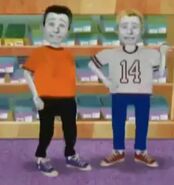 Mark and Derek's feet in socks 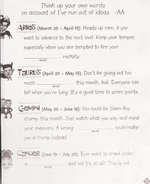 Add a photo to this gallery
Retrieved from "https://angelaanaconda.fandom.com/wiki/Mark_and_Derek_Anaconda?oldid=6895"
Community content is available under CC-BY-SA unless otherwise noted.