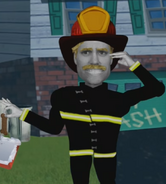 In Pet Peeves, a fireman is shown getting Johnny Abatti and a feral cat out of a tree, but loses Angela's respect as soon as he buys one of Nanette Manoir's dog treats.

An unnamed, blonde-haired woman, presumably in her twenties, is shown in Diving Miss Angela working at a marine park called Ocean Land and allowing Angela Anaconda to feed Sugar Pie the killer whale. She has the same face and body model as Raven Schwartz. 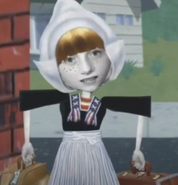 An unnamed Dutch girl that was Nanette's exchange student in the episode "French Connection". She shares multiple characteristics with Angela, like having Jasmine Ellis as her face model and Sue Rose as her voice actor.

Retrieved from "https://angelaanaconda.fandom.com/wiki/Unnamed_characters?oldid=6860"
Community content is available under CC-BY-SA unless otherwise noted.